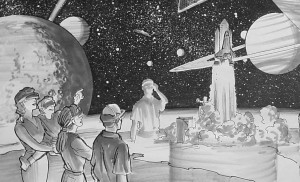 The promise of telepresence and social media has come up short in the human connection department. Communicating with loved ones in deep space will take much more than science & technology.  To avert the devastation of isolation suffered by loved ones exploring Mars, we need to find ways to increase the human connection and social engagement between people that are millions of kilometers apart. Just speeding up communications will not fully bridge the emotional divide. Even though asynchronous communication of Social Media has done wonders to connect the world, society has become more isolated than ever.  We need more than the just the genius of technology to form this interplanetary human connection. The current artistry of virtual worlds will require more than capturing the imagination or engaging the heart. We need to explore how one’s own perception of internal relationships can help transcend this chasm caused by sensory and social deprivation in deep space. It will take both art and science to figure out.

Imagination: I will see it, when I believe it!

We sometimes fail to see the power of our own imagination. In our research exploring the innovation process at the Technical University of Munich (TUM), we were interviewing how surgeon’s perceive new technology such as Mixed Reality. Nassir Navab, the Director of the Computer Aided Medical Procedure (CAMP) Lab asked surgeons, “how can technology help you see into the body better?” One surgeon responded, “I don’t need to see it, I need to believe it!”  That one insight has transformed the approach to medical imaging in all subsequent investigations. Instead of just improving the technology’s imagery, they needed to improve how the surgeon fully engaging their own imagination to create accurate mental models.  This is true for any high-performance and high-risk vocations from emergency response to inner city education. How can we transfer this power of imagination to transcend both time and space for human connection in deep space? How can we harness the imagination achieve deeper human connections?

The power of Imagination to Transcend Ourselves

You are traveling the space-time continuum of story. The author is co-opting your imagination with the stimulus of media to bring you into a creative story-trance between storyteller and story-listener.  This lucid dream-like state is the willing state of the audience putting their highly impressionable imagination to work for the intent of the author.  The mere ink blots on a page, in the form of words, can transport you to a place you cannot reach on your own.  These comforting imaginary-worlds have emotion, but without the pain; The journey is all pre-determined, but is still surprising; Even though the story ends, there is still a lingering story-world that stays persistent in our memories. Our memories remember this as if we had the experience ourselves.

We give too much credit to the author if we think all the power is in the artistry or the medium. Earnest Hemingway realized this phenomenon when he describes the art of a novelist. The writer uses less words to draw in the more of the audience’ imagination to achieve the best work. He estimated that as the author, he only created 1/8th of the story experience; while the reader was effectively filling in 7/8th of the story experience with their own imagination.

People mistakenly label this phenomenon as “the suspension of disbelief.” It is actually the opposite. The author realizes that it takes our full belief system in their story-world in order to construct a convincing fantastical story experience. This is similar to how our subconscious fabricates our dreams. You are giving the artistic license to the author to craft false memories into your mind. As theme park designers, we go even farther as we co-opt the memories that the novel or cinema creates to extend the immersion of the experience. Theme parks engage all senses, in all direction, in all dimensions and with all realities (real, virtual and imagined). This phenomenon is what we call “Painting with the Audience Imagination“.  The audience is still doing most of the work, but not realizing that the magic of the media is to make it seem effortless. In addition, the work of the author and the technology needs to become invisible. We have only begun to leverage this power of the audience’s own imagination to transport them into a deeper human connection .  This is central to our research to help increase the human connection between people through telepresence and Virtual Reality (VR).

The Untapped Power of the Audience’s “Empathetic Imagination”

In traditional forms of story, the magic of the “story-trance” between storyteller and story listener is similar to a hypnotic or dream state where the media drives the experience. Can we use this power in reverse to help with human participant drive a deeper connection with another person?

The next paradigm-shift for “experiential media” such as Virtual Reality (VR) will be engaging the full heart, head and body of the audience so their experience will drive the media versus the media driving the experience. The audience will be invited to more actively to participate with both the authorship and the agency of the story world. This will transform a “story-trance” into a “story-dance” where author, actors and audience create a form of square-dance of story-world creation. We are just beginning to formulate the artistic conventions, but unlike the birth of former media conventions, we are using both the art and the science of the imagination. This makes our work with partner, Jim Davies of the Science of the Imagination Lab, critical. In his book Riveted, “Why Jokes make us laugh…”

From Trance to Dance in Story Experiences

To reach the next major creative leap in the Language of VR, we will need to engage and exercise the audience’s “empathetic imagination” to equal levels of the author’s “expressive imagination.” On the audience side, the Experience Architecture will converge the physical, virtual and imagined realities into one world. The author on the other side will craft the InterPlay of  “serious play,” “gamification” and “story magic,” as a single medium. The Creative Technologist will procedurally weave them all with the artistry of Augmented Intelligence (the other AI), perceptual computing and Machine Learning. The culmination will be able to mediate between the expressive imagination of the author with the empathetic imagination of the audience to transform storytelling.

In this experiential media, the audience’s empathetic imagination will not be replacing the author or actor, it will merely be inviting the audience’s participation with the authorship and agency in order to intensify their human connection with story creation. This will completely change the way we create and experience social engagement with media that will make it as thrilling as it will be transformative.

Its curious how we have to consider traveling to other worlds to help figure out the power within ourselves.