When a colleague fell in the garden with a stroke, he suffered a devastating brain injury that statistically would more likely to have happened to any one of us.   He was healthy, bright and successful, but now with Aphasia, he is unable to communicate,  a curse unbearable to a storyteller and maker.  Similar to the condition of Gabby Gifford that was caused by a gunshot wound, the condition devastates the individual, the family, friends and colleagues.    Little did we know that the stories, architecture, technology and entertainment we do everyday, just may be the breakthrough not only for him and other aphasics, but for mental health patients worldwide.

Our preliminary work has shown that immersive storytelling may help aphasia patients to re-connect with their ability to tell story, and to find new ways to communicate. We are creating a Real World Laboratory in the Aphasia House, in order to explore how story, play, and game can come together to help a person re-connect with their ability to communicate. 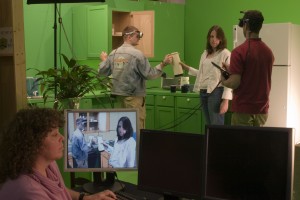 Christopher Stapleton and Simiosys have worked with Dr. Janet Whiteside (Director of the Aphasia House), and many of her colleagues at UCF’s College of Communicative Disorders on several exciting  projects that have explored the use of technology, storytelling and media, to help patients with a range of communication disorders from stuttering to Traumatic Brain Injuries.

In The Green Kitchen project, we were able to put a person with a Traumatic Brain Injury into a mixed reality environment. This individual was unable to form new memories, so he could not perform very basic tasks such as making himself breakfast in the morning. This was disabling for himself, and for his family. Through Mixed Reality, we were able to bring his kitchen into the clinic, so that he could practice with the critical presence of a therapist in the same sensory environment that he would have at home. For this particular individual, being able to touch the countertops; smell the coffee; and taste the bagel that he had made for himself were critical to being able to create a new connection. These interactions would not have been possible in a virtual reality environment, but by using Mixed Reality we were able to stimulate all senses in all dimensions, to create a positive effect.