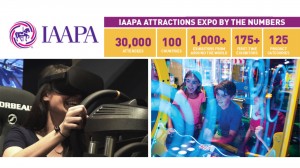 The International Association of Amusement Parks and Amusements Infographic

I have been going to IAAPA for 30 years. It is the largest Theme Park Conference in the world. I have also been going to IITSEC, the largest Military Simulation Conference in the world. They are in the same city at about the same time.  Over the three decades, they have been beginning to look alike.  The key common denominator is Virtual Reality (VR). At IAAPA, the VR HMDs were quite the oddity with the clowns, pitch games and frozen dots that fill the conference, but there was a difference this year.

Talon Simulation, who has been exhibiting VR at IAAPA for years, says the questions are changing about VR. Instead of people asking, “What is that (VR)?” They are now asking “How much is that?”  For being in the VR business for 30 years, I would say that is a turning point.  When they want to buy it, that is adoption! However, I ask,  ”is that true innovation?” VR has been creeping into all parts of the conference since Facebook bought out Oculus.  Consumers realized what immersive, interactive entertainment was all about. Out-of-home entertainment venues are now suddenly interested (or maybe scared of the competition?).

This is the “awkward stage”. for VR in the Location Based Entertainment (LBE) business.  They innovate like the razor business. The razor industry slaps another blade on and calls it “innovation.”  The entertainment industry slaps another “D” on it and calls it innovation. First there is 2D, 3D, 4D rides! Yes, a 5D attraction won an award this year. Doesn’t the 5th Dimension branded that already? In lieu of 6D they now have VR.  So slapping a VR HMD on the old carney rides and arcade games is now called “Innovation!”  REALLY?

The turning point with VR and LBEs is that now there is a demand. That means now we can start innovating creatively with it, not just the technology, but everything from the guest experience to the return on the investment (ROI).  What the industry doesn’t know is that VR, once it is considered strategically and not tactically, it will completely change the business as we know it. Are they ready?  Personally, I don’t think they are because they are calling them VR Arcades.  VR and Arcades are two industries that have already died a slow death decades before.  There will be a whole new experience, business and name for it. What should be call it?

Stay tuned, I have been taking notes on what I see and speaking to people to see how they react.  If nothing else, it will be both scary and wondrous!